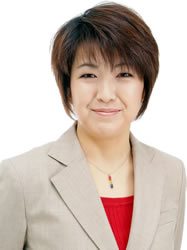 Kanako Otsuji became Japan's first openly lesbian politician when she was elected to the Osaka Prefectural Assembly in April 2003 at the age of 28 – making her the youngest person ever to be elected to the Assembly.

In 2007, Ms. Otsuji was an official Democratic Party of Japan candidate. She lost the Upper House election with 38,229 votes. If she had won, she would have been Japan's first openly gay national politician.

Over breakfast, she talked to Sayoni about being an openly gay politician in Japan.

What motivated you to get involved in politics?

The biggest reason is that I'm a lesbian. I have been a minority in society and it took me quite a long time to accept myself. I questioned myself over my sexual orientation for 4 to 5 years.

After I had accepted myself, I started becoming involved in the community and became aware of its situation. I realized the reason why lesbians hide in the closet: it was not because of who they were, but because society forces them to hide themselves.

As I struggled to accept myself, I hoped to change society. During that period, I was a student and got an internship with a politician – that's how I learnt that politics can change society.

During my interview with the politician to obtain the internship, I told them about my sexual orientation and I asked them what changes politics could bring.

While I was on internship, the office I was working for actually brought up questions to the assembly about gay people. I was very moved. Laws pertaining to LGBT had been underground until then (swept under the carpet).

Politicians were influential and I actually felt it. After seeing this, I realised I wanted to be a politician and make changes. Other than this, I was inspired by Harvey Milk (openly gay San Francisco politician). I had read about him in a book/documentary and watched a film on him.

What helped you to come out after 5 years of struggling?

First, the internet. Second, I was 18 when I started thinking about whether I was a lesbian. That was in 1993. At that time there was no internet. While I was questioning my identity, I had no idea who to talk to and where to go.

In 1995, female singer Michiru Sasano came out as a lesbian and that inspired me. The actual reason was that I started to become involved in the (LGBT) community in 1998. There were girls I liked, but their answer was always ‘no’, because of religion. I became involved in politics because of this – I had bitter feelings about this issue and I didn't want it to happen anymore.

How has being a politician changed your life?

Everything! Being elected as a politician is making yourself public. I have more responsibilities. If I were politically inappropriate, word of it would become news. In that sense, it was not easy for a 28 year old lady. In the assembly, younger women often do not have a chance to speak. That's why I had to obtain my own opportunity. So I studied the issues hard, because I would be picked on if I don't know anything. I needed to educate myself to destroy the stereotypes.

When I came out to the party, my perspectives and position changed.

On hindsight, would you have done anything in your life differently?

In 1995, I experienced a great earthquake in the city-port Kobe and 6000 people died from it. I learnt from that episode that life is precious and understood that our lives could end at any time. Through that experience, I learnt that I did not want to regret not doing anything. I decided to be myself and not regret later.

First, to come out as a lesbian. Second, to run for election as a openly gay person. I am proud of myself, that I had actually done it in Japan. I believe many people were encouraged and inspired. What one politician can do is limited, but this is still a great thing to do.

I received 300 over emails from supporters. It was the greatest achievement and also the biggest challenge.

What do you see as your greatest challenge in the future?

To get elected again. When I run in another election and find a party from which to obtain endorsement, as I have done previously, I would like to be recognized as a politician that happens to be queer, not just known as a lesbian politician. I have not reached that level yet. In the election that I lost, I had mainly focused on identity politics. During that time, I was aware that it was important that a lesbian was in politics. Now that I have done that, I'd like to go to a higher level.

For those of your fans out there who are wondering, do you have a girlfriend?

I have no comment on this. The election has brought a lot of sacrifice to my personal life.

Finally, do you have a message for your supporters outside of Japan?

The changes that have been brought to Japan, which is often considered conservative, were achieved by making our voices heard, so I believe you can make your voices heard too. Believe in yourself.