To empower queer women towards greater involvement and presence in the community
OUR VISION
LEARN MORE
Relief and Resilience Fund for LGBTQ+ persons
Donate to help LGBTQ+ persons impacted by the COVID-19 pandemic. Now open for applications!
Please write to us if you need help.
READ MORE ABOUT THE RELIEF FUND
Sayoni is a Singapore-based feminist, volunteer-run organisation that works to uphold human rights protections for queer women, including lesbian, bisexual and transgender women. We organise and advocate for equality in well-being and dignity regardless of sexual orientation, gender identity/expression and sex characteristics.

We believe that everyone has a part to play in improving the lives of LBTQ people. Donate or volunteer with us.

How you can help

We collect data and raise awareness about LBTQ issues

We hold events to build community

fShare
Tweet
The words of IPS Senior Research Fellow Leong Chan Hoong, as reported in Today, reflect this bias. “Singaporeans are not upset as long as gays do not advocate making alternative lifestyles a part of the mainstream.” Translation: As long as we don’t expose the straight people to gay sexuality. There is an appalling slant towards an existing message in his choice of words.

The international media has long been aware of the importance of sensitivity. GLAAD’s media reference guide states:

Offensive: "gay lifestyle" or "homosexual lifestyle"
Preferred: "gay lives," "gay and lesbian lives"
There is no single lesbian, gay or bisexual lifestyle. Lesbians, gay men and bisexuals are diverse in the ways they lead their lives. The phrase "gay lifestyle" is used to denigrate lesbians and gay men, suggesting that their orientation is a choice and therefore can and should be "cured" (See AP, New York Times & Washington Post Style).

It’s also a term that pops up a lot on certain Christian sites that emphasise that gay people can change, that is, gay conversion therapy, which generally holds that being queer is a negative thing. I’m not sure anyone really knows what a gay lifestyle is, though. I seem to spend a lot of time hanging out with my parents and working... oh wait, that’s what straight people do, too. And I’m single, which still doesn’t make me any less gay.

So where does this leave us? Should we all hang up our lives as lifestyles and dive deep into our closets forever? I think not. Bearing in mind that education levels tend to trend up as societies develop – we’re creating more and more tertiary institutions! – and assuming that attitudes really are affected by education, we have a picture where 39% of those with post-graduate qualifications either reject or strongly reject “the gay lifestyle”, but an almost equal 38% say they are accepting or strongly accept it.

The “neutral” section is also interesting. Are these the people who would only fight for their own causes and wants, or are they the ones who don’t want to appear gay or gay-loving in front of what might be perceived as a government-affliated body? In a Singapore where paranoia has sunk deep, although it is wearing away, it may not be easy for people to take a stand that is not government-approved. After all, the spectre of Section 377A is still here to tell us that gay sex and same-sex everything is not really okay, they just don’t persecute us.

Looking at it another way, we could also conclude that, overall, 47% actively reject “gay lifestyles”, whatever that is, and 53% don’t, while 55% are against gay marriage – 45% aren’t. Here's the chart in the OSC report, for reference. 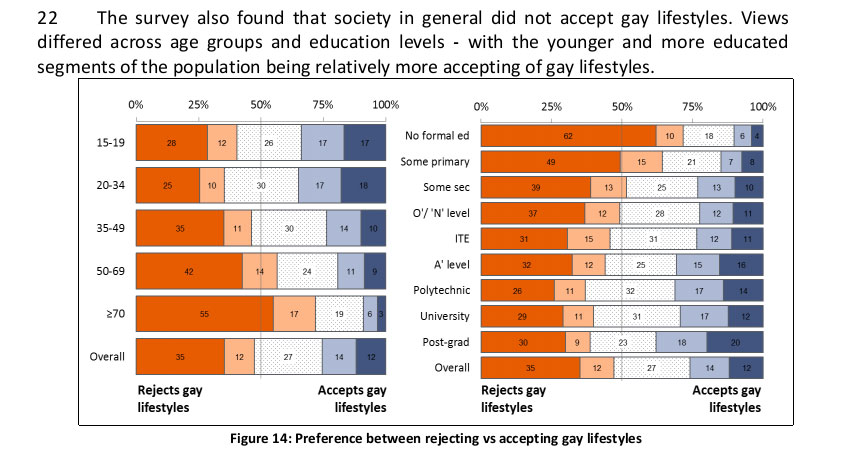 It might be instructive to bring up an earlier survey by the Wee Kim Wee School of Communication and Information at Nanyang Technological University. The 2010 version surveyed 959 adult Singaporeans and permanent residents. These surveys can’t be compared as they were completely different. But most strikingly, both found that negative attitudes decreased as education increased. The WKW study also sounds like it might hold up better to peer scrutiny. Alex Au took a closer look at the study at the time, in "Singapore creeps towards more acceptance of gay people".

Similar to studies conducted elsewhere, the survey found that Singapore citizens and PRs who have a gay or lesbian family member or know someone who is homosexual are less likely to have negative attitudes and be more accepting.

Interpersonal contact also appears to have a bigger influence in shaping attitudes and acceptance of homosexuals than mediated exposure to homosexual characters – i.e. seeing gays and lesbians in films and television programmes – which also predicted less negative attitudes and greater acceptance.

I'll probably think of the IPS survey as a curiosity and an informal study of what people here think, until the researchers can show it was an actual scientific study of any rigour. In the meantime, we can take heart that society is changing, and keep on working towards that change in our own little ways.


Editor's note: Fridae has contacted the IPS researcher Leong Chan Hoong, who "clarified that the survey did not elaborate on the contentious term and explained that the questions throughout the survey were designed to allow respondents to interpret the question "using a lens they are normally used to". Read their full article for more details.