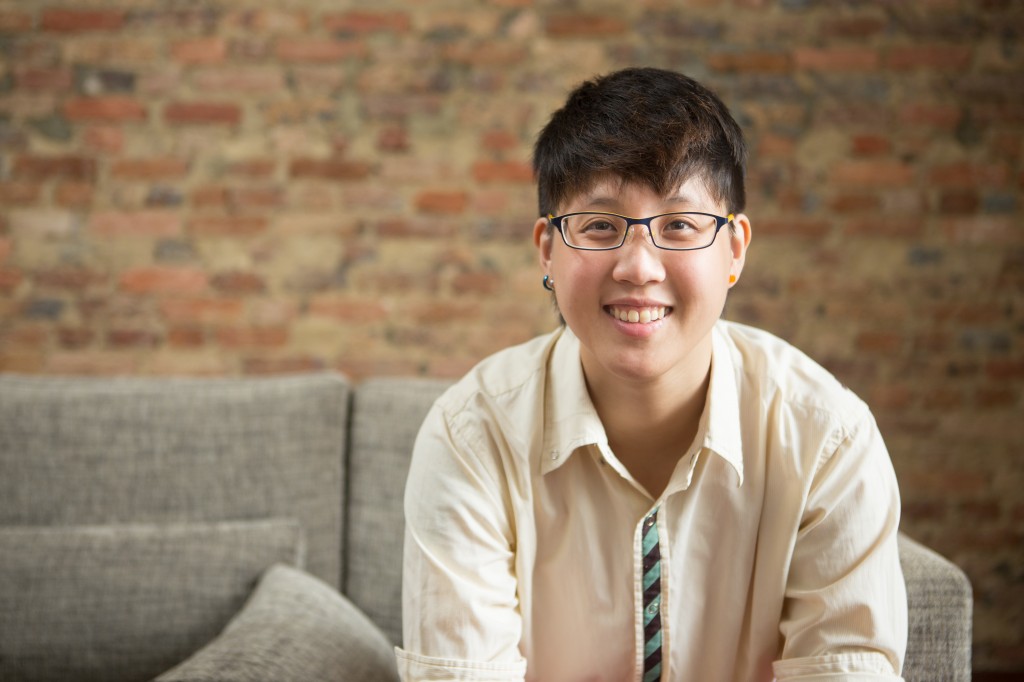 I’m Stephanie, 22 and I would say that I am more or less a geek. I like poetry but I don’t quite understand it. I like writing but I don’t write well. I love cats so much, my Instagram feed is full of cats… I’m an introvert. I’m out to all my friends and my family and even at work. I am agnostic. I like video games but I don’t have time to play them. I liked playing World of Warcraft – my avatars were always male. Yes, my avatar is a representation of me, though I don’t want to be a guy.  At the moment I’m hooked on consoles. I don’t watch TV. I use my TV to play games.

I believe that I am bisexual but I don’t ever want to date guys. I still find them attractive, but I got over it. When I was younger I didn’t know that this whole world existed. The word ‘lesbian’ was a word you used to tease people. I was first outed at a class chalet stay-over, when somebody went round and told everyone I had a crush on another girl. That wasn’t my choice. At the time there were girls and teachers I liked and had crushes on before, but I didn’t know what it meant. I looked more feminine then, I dated guys. One of my then-boyfriends blamed himself for my “conversion”. He likes cross-dressing. *laughs* But I never came out to anyone, though I wouldn’t say that I don’t like girls, if someone asked.

I lived in the East and my first girlfriend lived in the Northeast. I remember the first time we met. We talked on the phone often and we decided to go to Pasir Ris for our first meet up. I think it was the food court. Her Friendster profile didn’t have a photo of herself and to be honest her looks shocked me. Not because she was ugly, but because she sounded small and cute on the phone and I assumed her to be femme. But she turned out to be pretty andro/butch. I sent her home afterwards and I actually went up to her place. She had a black piano and could play it. I urged her to play a piece for me and she did. It was a Chinese song and I felt really touched because it was the first time ever anyone played anything for me.

My mum knew I had dated boyfriends before, but I kept bringing this girl home.  She asked me about locking ourselves in the room. My mum kept pushing me and pushing me for answers. Then my mum called my girlfriend to stop her from deterring my studies and to stay away from me. My girlfriend sounded very headstrong over the phone and my mum hated her from that point on. We broke up after that, but that had nothing to do with my mom’s egging.

Months later my mum and I talked about this stuff.

There was a lot of drama that stemmed from my first girlfriend – my mother blamed herself and said a lot of things. She called me names. It made a huge impact on my life and I’ve since forgiven her but it affected me. Shortly after that I met another girl who became my girlfriend. I don’t know if it was because my parents saw less of her (she lived in Malaysia) or something changed, because my parents became more accepting.

I want them to accept me and my partner.

Do I feel sad?

I don’t feel sad about my coming out story. If I described it in detail it could be horrible, but I don’t really remember the details. I notice the silver linings. I have grown into someone who is willing to volunteer at stuff like Pink Dot. Now my family is more accepting of the community. My sister used to HATE gay men. She was ok with females. But now she’s met some of my friends and realized they are pretty nice people. My mum has met them and asks if they are gay, full stop, and not “are they are gay, eeeee….” I try to talk to them about things like Pink Dot but it’s hard, especially in Mandarin. I still don’t know what her take on gay marriage and the like is. I think a lot of people are not accepting because some LGBTQ people just make it sound so unnatural. Awkward. If you make it sound normal then… I think people worry too much about what others might think.

Should a queer person come out? I myself didn’t have an option. I couldn’t decide when I could come out. My mother just decided to ask me. It became dramatic and there was a lot crying. Me being gay became the reason why everything I did was wrong. But that’s unfair. I think that if you can choose to come out, it’s your choice and you can plan what you want to say. You can make contingency plans. Of course there are other things to consider – if the person you love and wish to come out to is sick, ill. But the thing is… it’s easier now for people to understand. There are more platforms to educate people on. There are silver linings to every story.